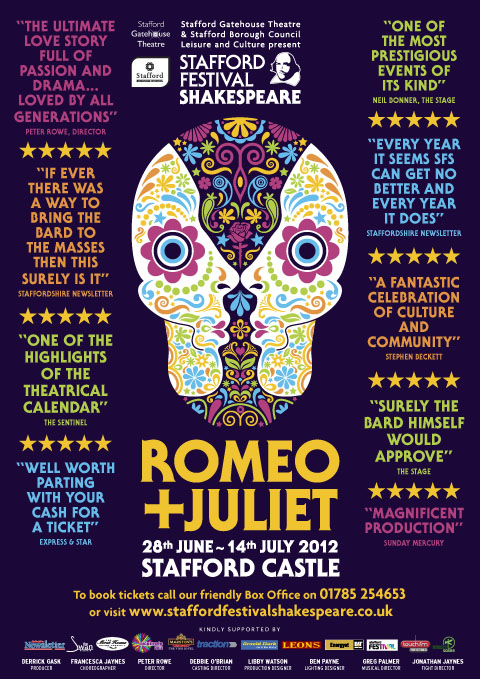 “What’s in a name? That which we call a rose by any other name would smell as sweet”

Stafford Gatehouse’s Stafford Festival Shakespeare production this year was Romeo and Juliet, the third time it has been produced for Stafford’s Open Air theatre, and Shakespeare’s 13th play. After the Comedy of Errors last year I was looking forward to what fresh inspiration the company and it’s technical team would bring to the play.

The play has a certain fondness for me, although I have never been in a production of the show, and formed a number of foundations for my undergraduate study during the first year of my degree. After the show I initially tweeted:

Back from @Staff_Gatehouse‘s ‪#RomeoandJulietStaffordCastle‬. I really enjoyed the performances of Nurse, Mercutio, Benvolio. More later!

Set in “somewhere like Havana, Cuba, in 1956” Shakespeare’s most famous love story brought together the Festival Shakespeare, known for bringing in headline names to tread the boards like:  Matthew Kelly, Eric Potts, Rene Zagger, Toyah Willcox, Rula Lenska, Scarlett Johnson, Russell Boulton but it is the supporting cast for me that always makes the show for me.

This year was no exception as Nicola Blackman’s portrayal of the (what seemed to me to be Jamaican) Nurse brought the house down with her physicality, rhythmic accent and raucous take on what many would have expected to be a solemn but supportive counsel in other productions.

Key to Romeo and Juliet’s success as a performance, for me, is down to is the pair of Mercutio and Benvolio, played ably by Christopher Fry and Peter Manchester, whose understated performances didn’t dominate the piece but allowed ample support throughout and enabled the connection with the audience for Mercutio’s fight with Tybalt for (arguably) the play’s most famous lines: “A plague on both your houses!”

One of the roles I used to desire most to play when I studied Performing Arts was Tybalt, played by Dan de Cruz in this ensemble (so I don’t want to seem like I am back seat driving because I really did enjoy his performance on Friday), but the artistic choices left me confused after the show. Watching the show’s promotional vidcasts showed that Dan has an exuberant character, as most successful actors I’ve known do, yet his Tybalt was more quiet and demure than I was expecting. From the way he carried his body in the performance and his slicked back hair it felt as if his Tybalt was constricted rather than unleashed, and I couldn’t put my finger on what by, but all in all it was a good performance and I did enjoy watching it.

Dwane Walcott and Poppy Drayton’s Romeo and  Juliet under the stars of Stafford Castle was so confident and competent that would not have suspected that it was their first professional performances of their careers.

Overall I liked it and would definitely recommend going to see it, and if I can afford it (with enough seats to accommodate) I may go back before the show closes on the 14th July.

You can also read the Staffordshire Newsletter’s Review here.

Click read more for an interview with Romeo and Juliet director Peter Rowe: